System generation and energy storage in the form of hydrogen

Due to the difficulty of managing the electricity fed into the grid by wind turbines it is not as easy to store mechanical energy (by torque axis), the technological developments aimed at correcting this variability are looking toward the estimation and storage of electric power that the wind farm delivers to the grid.

One possibility of storing the electricity generated at a wind farm is to accumulate it in the form of chemical energy. The chemical reaction utilised must be reversible, that is, with the ability to absorb energy in one direction and deliver it in the other, thereby enabling the electric power storage.

The chemical pair which now raises a major technological interest in the storage of electric energy is hydrogen-oxygen. Both elements form the water molecule (H2O) and can be obtained by electrolysis (breakdown by electricity). The subsequent combination of both (H2+O2) to form water returns some of the energy absorbed in the previous electrolysis process.

One of the advantages of H2- O2 pair over others is that it is only necessary to store the hydrogen, and oxygen can be returned to the atmosphere from which it forms part.

Even if it is the fuel cell which has revolutionized the use of hydrogen, its combustion in an internal combustion engine with oxygen is a technology that is widely known.

In the spring of 2005 an agreement was signed between Natural Gas and the Ministry of Economy and Industry of the Galician regional government for the development of a pilot scheme for wind energy storage through chemical energy.

The project infrastructures are located within the Sotavento Experimental Wind Farm. The wind power storage plant uses hydrogen at a scale which, although not being within the scope that meets the variability of generation, has allowed real operational experiences to be transferred to the design of global solutions.

The production of hydrogen is formed by an electrolyser of 60 Nm3/h rating capacity fed by power from wind turbines. The electrolyser produces hydrogen at low pressure which is then compressed up to 200 bar, reducing the storage volume. For subsequent conversion to electricity, a 55 kW electric motorgenerator is employed.

Operation of the storage of wind power or renewable energy

One possible way to store the electricity generated at a wind farm is to transform it into hydrogen.

The electrical energy to be stored is diverted into an electrolyser, which is a device in which an electric current is passed, that separates water into its two components: oxygen (O2) and hydrogen (H2) as there action H2O = H2+½O2. The H2 obtained is compressed to make easier storage, while the O2, which has no energy content, is released into the atmosphere of which it is already a part.

The H2 is kept stored in pressurised containers until the time that it needs to be used to generate electricity in situations of demand or necessity of management.

In this case, H2 is used as fuel in a group of electrical generation whose engine is similar to natural gas but adapted for hydrogen. The engine draws atmospheric air whose oxygen, in a 20% proportion, is triggered by sparkplugs, reacting with H2 in the cylinders.

The combustion of the H2+O2 releases only water in a reverse process which has been produced in the electrolyser.

The crank shaft of the engine drives a generator that produces new electrical energy that is delivered to the network. 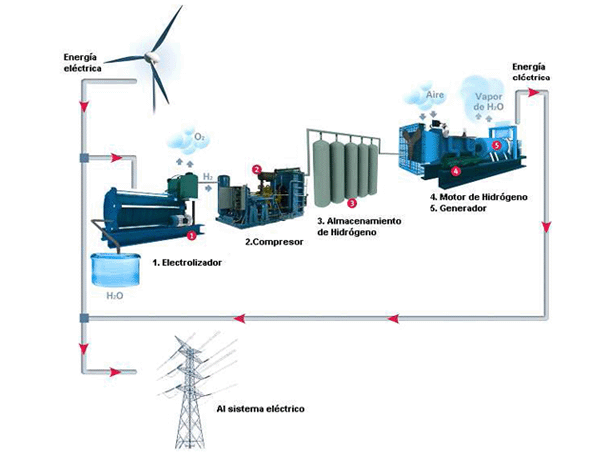 The different phases of which the project has been comprised:

The project has been completed in December 2011.