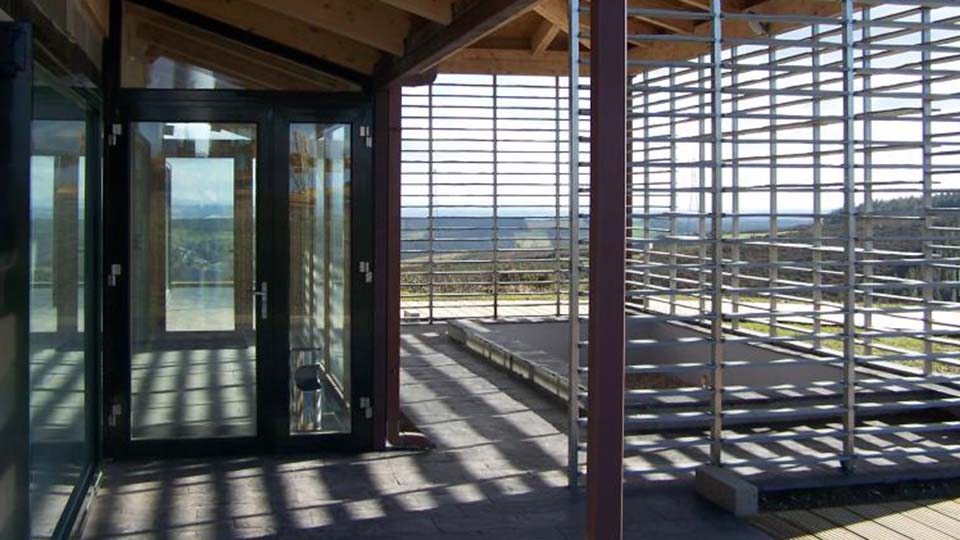 The Sotavento Galicia Foundation has at Sotavento Experimental Wind Farm a bioclimatic demonstration house, inaugurated on June 21, 2010. This is a house of 240 m2 constructed under bioclimatic criteria, which have minimized its air conditioning and lighting energy needs, and also includes the use of renewable energy sources.

Other important elements related to air conditioning installations are deposits of thermal energy storage (solar and buffer tank) and an evaporative cooler. The property also has a few passive systems such as Trombe walls, galleries, parasols, etc.

In addition to these facilities it is necessary to point out that the house was designed with the purpose of being used for publicity purposes, and above all, as a factor enabling research and development activities related to energy efficiency, renewable energy and bioclimatic architecture. In this sense, the house was installed with sensors and control elements related to their operation. Given the complexity of this system, the number of these elements exceeds 300 units. Among the variables monitored or controlled include:

The integration of the acclimatisation systems, the behaviour of the bioclimatic house and renewable energy systems define a complex system which is accessed through the monitoring and introduced control variables. In the house there is implemented some management strategies on site that could be improved to ensure that the house works under the criteria of maximizing energy efficiency and renewable energy use. These are the objectives that the project has been raised:

The work described was part of the project “Evaluation of energy efficiency and renewable energy integration in the bioclimatic demo Sotavento Experimental Wind Farm” (2010-2011) funded by the Ministry of Economy and Industry (Government of Galicia) and directed by personnel at the Electrical Energy Department the University of Vigo. In this project, the following entities have collaborated: GOC, S.A., IDI Energy, FAIMEVI, as well as Sotavento, providing the latter with access to all monitored data in the house in addition to its parameters.

To achieve these objectives it was necessary to address the following phases:

The project was completed in early 2012. Studies and major conclusions were: